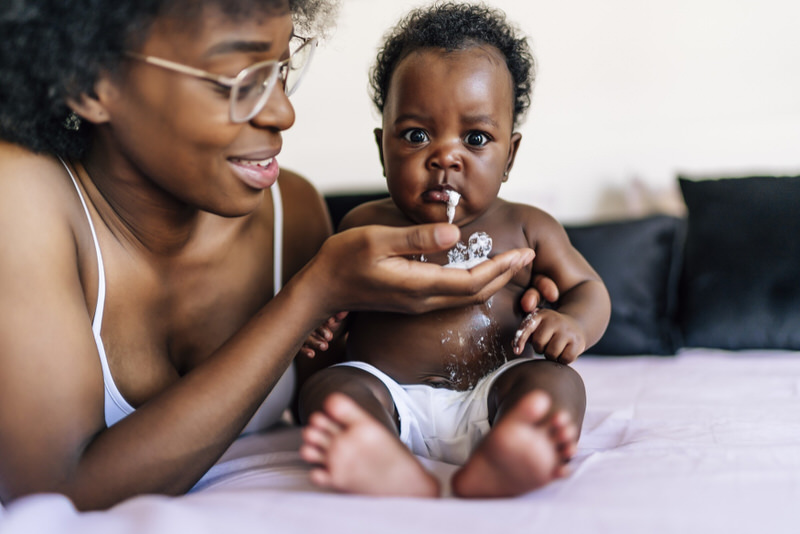 It’s usually normal for babies to have milk coming out of their noses as this is a form of spit-up. This may be because of too much milk intake, an immature nervous system, a distracting environment, and certain medical conditions. This may be normal in babies up until the first year of life. When spit-up happens, stop feeding and bring the child up to an upright position. Making sure there isn’t too much milk being given, regularly burping, and an optimal feeding position and environment will help prevent spit-ups.

Whether you’re a first-time or a veteran parent, spit-ups are often concerning. What more if your child suddenly spills milk out of their nose? Is this an emergency or something normal?

Why is my child gasping for air and milk coming out of their nose?

Seeing milk drip out of a baby’s nose might be more common than you think. This might even be accompanied by gasping or struggling for air. But why does this happen?

What causes spit-ups in the first place?

Nasal regurgitation and spit-ups overall are usually seen in newborns but not in older children and adults. There are a couple of reasons why this happens to them in particular:

1. They sometimes drink too much milk

Whether they are breastfed or bottle-fed, infants are prone to drink a lot of milk, and it’s not always their fault. Some breastfeeding mothers may have too strong of a letdown reflex while their baby is latched.

This means that there’s too much milk coming out of their nipples than usual, and their baby becomes overwhelmed by the amount of milk. This results in excess milk being regurgitated through the mouth or the nose.

Other signs of an excess supply of milk include babies who are coughing, choking, or looking uncomfortable or restless while breastfeeding.

The same goes for bottle-feeding babies: if the nipple or teat of the bottle has a very fast flow rate, a lot of milk freely passes through the nipple. The baby also gets overwhelmed with this milk and may end up spitting this out.

2. They have an immature nervous system

All healthy babies are born with protective reflexes, like the Moro reflex, because their nervous system is not yet fully mature.

Several babies may have the “hyper-gag reflex,” which triggers spit-ups more easily as compared to older infants and children.

It’s an unusual reason, but a lot of babies do get distracted while feeding. Playful sounds and objects can easily make a baby forget they are drinking milk.

When they do remember to swallow the milk, they end up taking in more than usual, and gulping it all sometimes isn’t enough to keep it down in the stomach.

4. They swallow air with milk

Maybe your infant wasn’t fed on time, and they got really hungry. In all their excitement to drink milk, they end up swallowing air along with it. A lot of air in the stomach is not a good thing, and as the body tries to get rid of it, some milk may go along with it.

Also, when parents try to burp their babies to remove some of the air in the stomach, some milk may come out of the nose or mouth.

Children with a cleft palate may find it difficult to keep milk in their mouths. They end up having milk coming out of their nose.

6. They may have infant reflux

In the area where the esophagus and the stomach are connected to each other, there lies a one-way valve that helps keep food in the stomach.

Babies may not have a fully developed valve, and in turn, this can allow milk to reflux back through the esophagus and into the mouth and nose.

Is it normal that milk comes out of their nose?

A lot of babies do experience milk coming out of their nose. Spit-ups are typically seen in infants, and it’s not uncommon to observe them a few times in the span of a day.

The peak of spit-ups is at about 4 months of age. By the time your child learns how to sit up on their own, which is around 5-6 months old, they should have fewer episodes.

It should definitely be uncommon by the time a child turns 18 months old.

What do I do when my child has milk coming out of the nose?

Try to avoid panicking and help your child recover first from the episode. Here are some tips you could follow:

If the spit-up happens while you’re feeding your baby, stop temporarily. You can give a few gentle pats in the back to help clear out the milk.

2. Help your baby calm down

Infants can read their parents’ emotions. A panicking mom or dad will not help them feel better and may just make them more irritable. Speak to your child in a warm tone, or soothe them with gentle movements.

3. Clean up and change position

Gently remove their clothes and replace them with clean ones. Wipe the milk from the nose while holding your baby in an upright position. If you have a nasal aspirator, you can use it to help clear up the milk.

If they are asleep when the spit-up happens, you may turn them on their side instead so that you avoid waking them up entirely.

How can I prevent spit-ups from happening?

There’s no proven way to stop spit-ups from happening 100% of the time, but there are several ways we can help prevent it from happening.

1. Feed at the right time

Watch out for your baby’s hunger cues. Don’t leave them waiting for too long before you feed them again.

Remember, a very hungry baby can swallow a lot more air as they grasp for their milk in the first few seconds of feeding.

2. Feed at an upright position

Keep your baby in an upright position during and after feeding. This makes use of gravity, decreasing the chances that milk will go up the esophagus and come out of the mouth or nose.

Choose a quiet room with few distractions, away from any noise. You can play a soothing or calm lullaby to help your child focus on feeding.

Again, a distracted infant will not regularly swallow milk, and a huge amount of milk left in the mouth can lead to spit-ups.

4. Make sure they aren’t drinking too much milk

For breastfeeding parents, check if the letdown reflex is so strong that the milk comes out of the nipples so quickly.

If this happens, you might need to adjust by expressing some milk for a few minutes before latching or utilizing a laid-back nursing position so that milk flows against gravity, decreasing the amount that comes out.

For bottle-fed babies, check the nipple. Make sure that the hole isn’t too large that the milk just flows straight through. Choose a nipple with a good flow rate.

During feeds, place your baby in more of an upright position, and don’t place the end of the bottle higher than the level of the nipple, so your child can self-regulate the amount of milk they swallow.

Don’t forget to burp your child after every feeding or if they pause in the middle of a feed. This helps release unwanted air that enters their stomach. Babies and infants need help in burping because they don’t have a mature digestive process to burp on their own.

How do I know if my child is vomiting and not spitting up?

Babies who are simply spitting up are called “happy spitters” for a reason – they don’t look distressed or bothered by the regurgitation. Vomiting, on the other hand, is a forceful expulsion of milk, like a fountain for example.

When should I bring my child to the doctor?

If your baby has difficulty breathing even after the spit-up, develops a bluish discoloration in the face or lips (called cyanosis), or doesn’t gain enough weight, they may need a proper medical evaluation.

Also, if you see blood or greenish fluid in the vomit, it’s also best to have them checked by a doctor.

Spit-ups can look very concerning, especially for first-time moms and dads! Milk coming out through the nose can be common in newborns and infants.

There are a number of reasons as to why this happens, such as too much milk, an immature nervous or gut system, and other conditions. There are different ways to help prevent spit-ups in newborns. But at any point, if you feel uncomfortable seeing your child spit up, it’s best that they are seen by a medical professional.

Sarah is a healthcare writer, motivated by her love of reading books while growing up. She took up human biology and further studies in medicine, in order to fulfill her passion for helping kids. While she isn't a biological mother yet, she has taken two young dogs, named Indy and Obi-Wan, under her wing. She would love to someday travel the world and meet kids from different cultural backgrounds.