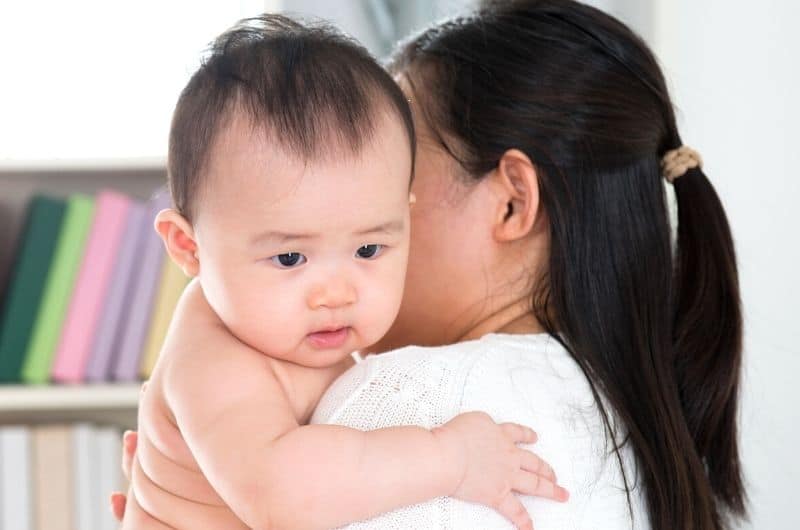 Are you not able to stop your baby’s hiccupping? While hiccupping is a normal phenomenon, sometimes you don’t know how to prevent your baby from hiccupping. Since adults are affected by hiccups a lot, they think their baby might be troubled by it and want to do something to make it go away.

Hiccups are caused by a contraction of the diaphragm and the quick closing of the vocal cords. Startling as baby hiccups are at first, they’re likely bothering you much more than your baby. It is entirely normal for your baby to get hiccups. As a matter of fact, your baby starts hiccupping even before they are born, in your womb. Studies have found that a baby begins hiccupping in the womb as early as 6 months of pregnancy.

Hiccups are an everyday occurrence, and generally speaking, there is nothing to be worried about. There are pretty typical reasons why your little one is hiccupping, which we shall explore and discuss in more detail. Further, you can also learn tips and tricks as to how to stop the hiccupping. Finally, you should know what not to do when your baby is hiccupping since that’s an important aspect.

How Hiccups Occur in Babies?

Hiccups occur when there is air trapped in the lungs. For a basic and simple explanation, hiccups can be explained as the diaphragm’s contraction and quick closing of the vocal cords.

When a hiccup occurs, the diaphragm suddenly contracts, quickly causing air to get sucked in a little more forcefully than a usual breath. When this air hits your baby’s vocal cords, they close suddenly, causing this sound of hiccupping.

Causes of Hiccups in Babies

It is a pretty common thing to happen to babies or adults, but most parents get very conscious and protective of their little one and want to know what actually causes these hiccups. It might occur just after a feed or when they get excited and usually lasts for 2-7 minutes. Below are simple reasons why your baby is hiccupping so much:

While these are typical reasons for hiccupping but if they are not going away and happen too frequently and it goes on for more than 5 minutes, they might have gastroesophageal reflux disease (GED).

Don’t be alarmed with this big name because it’s not as bad as it might sound. It is when hiccupping is more often with symptoms like spitting and irritability too. Just visit your doctor and seek their advice.

Tips on Preventing Hiccups in Babies

Generally, hiccups go away on their own in a few minutes, and so you don’t have to worry too much about them as it’s not harmful to babies. But even if you want to know how to minimize the causes of hiccups, you can keep a few things in mind to do that.

Feeding your little one properly is essential. There are times when the position isn’t right, and so your baby might start hiccupping suddenly. You have to be careful of the position you feed your baby in as it affects them in many ways and not just causing hiccups.

So, the next time you feed, try to find out the position you feed your baby in and exactly which one is causing them hiccups and change your feeding position accordingly. Also, please don’t wait till they are very hungry to feed them. Clock your time between feeds and feed them before they get too hungry.

After you have fed them, avoid doing any jumping with them or activities which involve a lot of hopping around. Let their food digest a bit before indulging them in something extreme or too adventurous.

After feeding, you should immediately put your baby in an upright position close to your body and burp them by gently patting their back or rubbing their backs. Keep a cloth on your shoulder before you attempt to burp them, as sometimes they throw up a small amount of milk.

Sometimes even a pacifier works wonders. You can try stopping the hiccups by handing your little one a pacifier, and sucking on it for a few minutes should help them get relief from hiccups.

There is something called gripe water that is also supposed to help little ones stop from hiccupping. It is a mixture of some herbs and water, usually used to treat stomach problems. You can use ginger, chamomile, fennel, and cinnamon to make it. Since it’s more like a homemade solution, it might or might not work, but there are no side effects.

What not to do to stop hiccups in babies

While there are tips and prevention on the one hand for a hiccupping baby and to help them in any way possible, there are other things that a parent should never do to stop the hiccupping. These things can be described as:

The above mentioned were a few of the commonly heard tricks to stop the hiccupping. But as explained in detail above, don’t even think about applying these to your baby. However, you can use the tips from the tips and prevention section as they aren’t harmful to your little one.

How many hiccups are normal for a newborn?

As often as you feed them, they most often hiccup after each feed for a minute or so. So I would suggest that you burp them as it helps reduce hiccups and digestion of food. So if you feed your newborn 3-4 times a day, then hiccups will occur 3-4 times a day.

Should I pick up a baby with hiccups?

You should pick up your baby and try to soothe them by gently rubbing their back or give them a pacifier. Hiccups are pretty harmless, so they would stop in a minute or so.

Babies normally hiccup but babies with reflux hiccup a lot. This is caused by extra air in their stomach and the esophagus’ spasms irritated by reflux stomach acid. You should visit your doctor if that’s the case.

If you can feel your baby’s hiccup in your womb, then it’s not a sign of distress but actually a good thing. While for some women, it might not happen, but for some, it does, and you don’t need to worry if it does. It’s a rare sign that something might be wrong, but not always.

Newborns tend to hiccup a lot, and they do so after every feed. This is a common issue with newborns, so you don’t have to get worried about them hiccupping from time to time. You should not be worried about something that goes away as your baby grows. As they grow old, hiccups become less and less common.

If you still feel that you want to minimize hiccups in your little one, then there are some tips and prevention you can take up and follow-through that I have already discussed in detail. Then there are also things that you shouldn’t do even though you have heard about these tips from many people but never try them on your little one, and you can explore that in the section on what not to do when your baby has hiccups above.

Just don’t worry or overthink about something natural. Only worry if things feel are getting out of hand, and then you should visit your doctor and consult them to find out what is causing the unnatural hiccups in your little one.

Everything you need to know about: