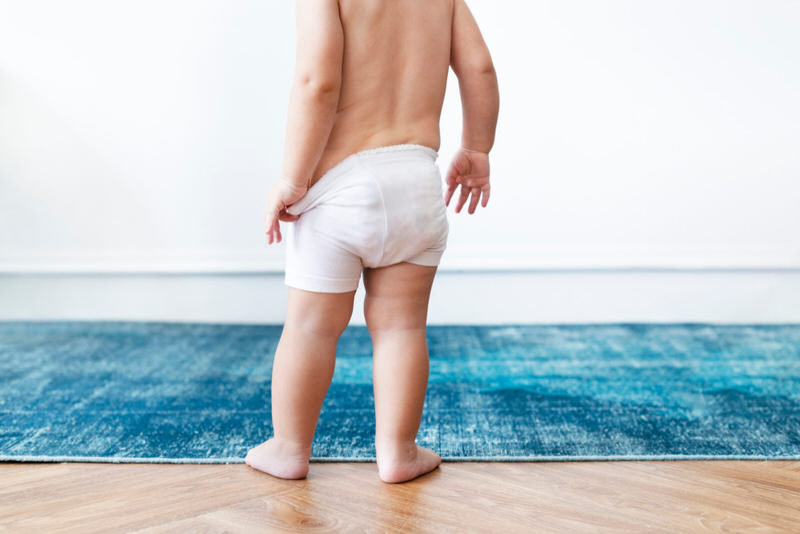 One of the reasons your toddler keeps taking his diaper off is maybe they now know how to do it, or he might now have started to realize when he wet and soils the diaper and is uncomfortable in it. Another common reason for toddlers to remove their diapers is due to the rash caused by the diaper. Your toddler removing his diaper frequently might also indicate that he’s now ready to move on from the diaper and into underwear, and if he’s 2, he might be ready to be potty-trained. But if your toddler keeps removing his diaper multiple times in a day without any foreseen reason, then you can keep it on by making them wear onesies or sleepsuits and zip them backward. You can also use duct tape and tape them around the diaper openings.

Babies turn into toddlers in the blink of time, and along with achieving their milestones, they start learning to do all things that might even push our buttons.

From trying to jump from the sofa to try to put their tiny fingers between drawer openings, they’ll try to do everything in their exploratory stage.

One of the common things most toddlers start to learn by the age of 18 months is how to remove their clothes and diaper. Is it because they’re suddenly uncomfortable, and that’s why they remove their diapers?

Nope. They do it because they learned how to remove their clothes, easily remove their diapers, and go commando!

6 tips to stop your toddler from taking their diaper off

There are a lot of reasons why toddlers remove their diapers off. One of the main reasons toddlers do it is because they want your attention or are simply bored.

Be it their randomly thrown tantrums or knowing how to remove their diapers and clothes off – all they need and want is your attention. After being trapped in diapers for a couple of years, it’s pretty exciting for them to suddenly figure out how to take them off.

1. Make sure your child is comfortable

The reason why your toddler might keep taking his diaper off frequently is that he might be quite uncomfortable wearing it. So, check the source of the problem.

A common reason is that your toddler might have developed rashes, making him itchy and uncomfortable while wearing a diaper. Use a good diaper rash and use diapers that are a little looser on the waist.

Another reason is that your toddler realizes when he has wet his diaper or made a poo-poo and doesn’t like the diaper to stay on.

Your toddler doesn’t need to have a diaper rash. He might not be comfortable with the particular brand of diaper you’re using for your little one. Sometimes when diapers are made of plastic, they can trap heat, making your little one uncomfortable.

So, if this is the case, try switching diaper brands or try cloth diapers that are more breathable.

3. Know why your toddler takes off his diaper

Sometimes it’s not even a medical reason, and your child might be taking off his diaper because of the sheer novelty of him learning how to remove it or to get your attention.

It might be that the first time he removed it, you might have given him a reaction- negative or otherwise, and to get that attention and reaction again, your toddler is doing it again. So, try to keep calm when he does it and try not to give him a reaction.

Toddlers are too curious and become tiny, little explorers, and one such thing that they have discovered is learning how to take their diapers off easily.

If your toddler has mastered this annoying skill of removing his diapers, then use duct tape over the tabs during every diaper change. But, make sure that you don’t leave your child unsupervised because if he manages to take off the duct tape, it can be a choking hazard.

So, try not to duct tape the tapes of the diaper at night time.

Another solution can be putting the diaper backward in a way that the duct tape will be on the backside where they can’t reach, or double up your diapers, putting one the regular way and another one backward.

5. Dress them in onesies or sleepsuits

It might stop your child from taking his diapers off if he’s dressed in a onesie. Make it more difficult for him that he no longer sees as a challenge and gets bored by the task of removing his clothes and diaper.

Dress him in a onesie and put on shorts on top of it, or your can dress them in sleepsuits the whole day, but with a twist.

Put on the sleepsuits backward and zip them from behind. It might slow them down, and they might stop trying to remove the sleepsuit and diaper.

If your toddler is around 2-years-old and removes his diaper often, he might be trying to tell you something. Maybe your toddler wants to be more independent and wants to take control of the situation, which is why they keep removing their diaper, telling you that he’s ready for underwear or potty training.

You can try starting to potty train your little one around this time, but if you face too much resistance, then stop for a little while and try again.

When should a child be out of diapers?

Most children are often potty trained and completely stop using diapers between 18 and 30 months of age.

What are the main symptoms of autism?

Symptoms include repetitive behavior such as hand-flapping, rocking, jumping, fixation on certain objects or activities, or extreme sensitivity to touch, light, and sound.

So, these are some of the basic things you can try out if your toddler keeps pulling off his diaper.

You should also keep in mind that many of the times, children sometimes show out-of-the-box behavior just for fun, and it doesn’t mean that you should panic thinking something is wrong with your little one or that you’re doing something wrong.

Relax, trust your instincts, and you can always consult the pediatrician if the behavior doesn’t change even after trying everything.

Meanwhile, comment down below, what was your typical reaction when your little one takes off his diapers?