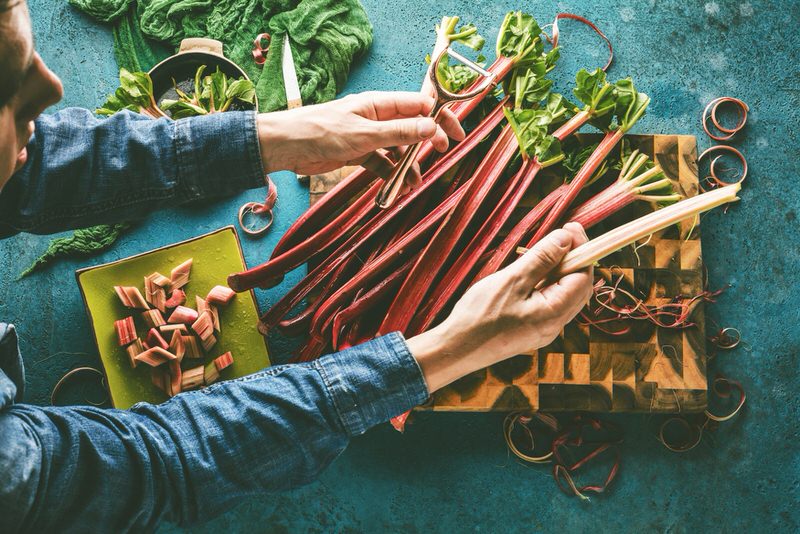 Rhubarb is a vegetable that can be good for pregnancy if consumed in moderation. The leaves shouldn’t be consumed as it contains toxins and a high concentration of oxalic acid, which can be harmful to the pregnancy. The stalks of this vegetable are edible and are used as an ingredient in various sweet dishes. Someone with sweet cravings can benefit from this, as rhubarb might benefit during pregnancy. It has a good nutritional value and is low in calories. It also helps control hypertension by lowering blood pressure and is a vitamin K and calcium source. If you have any doubts, it’s better to consult your doctor before consuming rhubarb.

Pregnancy is a delicate time for the parents to be, and you’re always mindful of what you’re feeding your body. Whatever you intake directly affects your baby, too, and that’s why a healthy and balanced diet is always promoted during this time.

But there’s a list of items that should be avoided during pregnancy as it can lead to abnormalities in the baby or harm the pregnancy in various ways. While fruits and vegetables are always encouraged during this time, can eating rhubarb, a vegetable famous for its reddish stalks, be harmful in any way?

Let’s take a look if this vegetable is to be avoided, or should you include it in your diet for its beneficial properties?!

Rhubarb is a vegetable with reddish stalks and a sour taste, usually cooked with sugar. Although usually found in mountainous regions worldwide and especially in Northeast Asia, it’s commonly found in North America and Northern Europe.

But when it comes to this vegetable, only a specific part of it is edible: the stalks. The leaves contain toxins and high concentrations of oxalic acid.

This is why it’s never to be eaten raw, as consuming high quantities of calcium oxalate can cause a serious condition called hyperoxaluria. It can eventually make you very ill and potentially lead to kidney failure.

While the leaves are certainly avoided, the stalks still get a green flag when it comes to eating them during pregnancy. But even stalks can sometimes contain calcium oxalate in lower concentrations, and that’s why it’s better to consume rhubarb in moderate quantities and never in excessive amounts during your pregnancy.

Benefits of rhubarb during pregnancy

Rhubarb being a vegetable, can be very useful for pregnant women or people because of its nutritional value and the property of being low in calories.

If not taken care of or controlled, it can lead to a condition called preeclampsia.

A study published in the December 1999 Chinese journal “Zhongguo Zhong Xi Yi Jie He Za Zhi” indicates that rhubarb given to a study group resulted in decreased cholesterol levels and improved vascular health.

Researchers theorize that this reaction may prove helpful in treating pregnancy-induced hypertension, although more research is needed.

Although there’re other solutions, such as resting and reducing sodium intake, eating rhubarb might also help.

Rhubarb stalks are also rich in vitamin K, a vitamin needed during pregnancy. This vitamin is essential in helping the body coagulate blood and prevents fetal brain hemorrhages during the birthing process.

Pregnant women or people also need 1,000 mg of calcium each day to help the fetus grow strong bones. A calcium deficiency is quite a common report during pregnancy in people, and often they’re recommended a healthy balanced diet and supplements.

Rhubarb might also help provide calcium during this time as 1 cup of cooked rhubarb provides 348 mg of this mineral to you.

Rhubarb is a vegetable, but the surprising thing is how this is cooked with sugar and mostly made into a sweet dish recipe. It’s often used in sauces, pies, muffins, and cakes. Its tart or sour flavor can be used well to make a dish for those who wish to eat something sweet.

Rhubarb sauce can be served as a side to meat or served over ice cream or pound cake too. The important thing to remember while cooking rhubarb is that it must be cooked down, and the fibrous texture of this vegetable is too tough to chew, so when cooked down and sweetened, it turns into a delight on your tongue.

When choosing rhubarb, make sure you select one with firm stalks. Avoid the ones who have blemishes. Since you want to avoid leaves, make sure to get one that has fewer leaves on it.

Please don’t cut the stalks until you’re about to use them as it dries out quickly. You can store them in a plastic bag to make sure it lasts.

The kinds of dishes you can make from rhubarb include the following:

It’s heaven for those who especially have a sweet tooth or those with sweet pregnancy cravings. You can try making these with your partner or buy them from somewhere when you’re not in the mood.

But one thing to remember to enjoy rhubarb is that it has a particular season when it’s grown, and usually, it’s not available after June. Because of this reason, you should enjoy these wonderful dishes when the rhubarb season is in full swing!

Can rhubarb cause contractions?

Rhubarb stalks, when eaten in moderation, are fine to be consumed and shouldn’t cause any issues in pregnancy. But it might be unsafe if consumed in greater amounts and can lead to stomach and intestinal pain, watery diarrhea, and uterine contractions.

It’s safe to eat rhubarb in moderation while you’re pregnant. The stalks make for a healthy option and are best eaten cooked and sweetened with sugar in a pie or crumble. The raw rhubarb has a naturally sour taste and can’t be consumed directly.

Rhubarb leaves are also not a good option to consume as they contain toxins that can harm the pregnancy.

What are the side effects of rhubarb?

Rhubarb has many side effects, including stomach pain, diarrhea, nausea, vomiting, and cramps. The leaves are really unsafe to be consumed since they contain oxalic acid, and that’s why rhubarb leaves should never be consumed during pregnancy, but the stalks are still good to eat only in moderation.

Is it safe to eat raw rhubarb?

When eaten raw, rhubarb can be sour in taste, which isn’t something most people prefer.

Instead, it’s cooked with sugar and tastes good when used in a sweet dish, and it goes really well with strawberries. The stalks are the edible part of rhubarb, and leaves should be avoided at all costs for it contains toxins.

How is rhubarb eaten?

There are various ways to eat rhubarb, but people rarely eat it raw. The taste of the stalks is a bit sour, so when trying to eat it solo, you can dip the stalk into sugar or honey to help mellow out the tart taste.

You can also whip up a raw rhubarb compote and add it to your morning bowl of yogurt. The acidity of rhubarb goes well with sweet ripe strawberries, mangoes, and coconut.

A lot regarding what to eat and avoid needs to be looked into during pregnancy. Some food items can indeed prove harmful for the fetus and your health during this time, leading to thorough research into what items can be eaten during pregnancy.

Even though a vegetable, rhubarb also has a part of it that isn’t to be consumed during pregnancy. The leaves should be avoided as it contains calcium oxalate, which isn’t good for the pregnancy. But the stalks are healthy enough to be consumed.

Effects of rhubarb stalk might prove to be helpful for your pregnancy when consumed in moderation. It’s usually used as an ingredient to make sweet dishes, and someone with sweet cravings can benefit from consuming both sweet and rhubarb as an ingredient in it.

If you have any doubts, it’s better to consult your doctor and seek a professional opinion from them, for there might be a chance of rhubarb reacting with some you’re medicines you’re taking and have adverse effects.