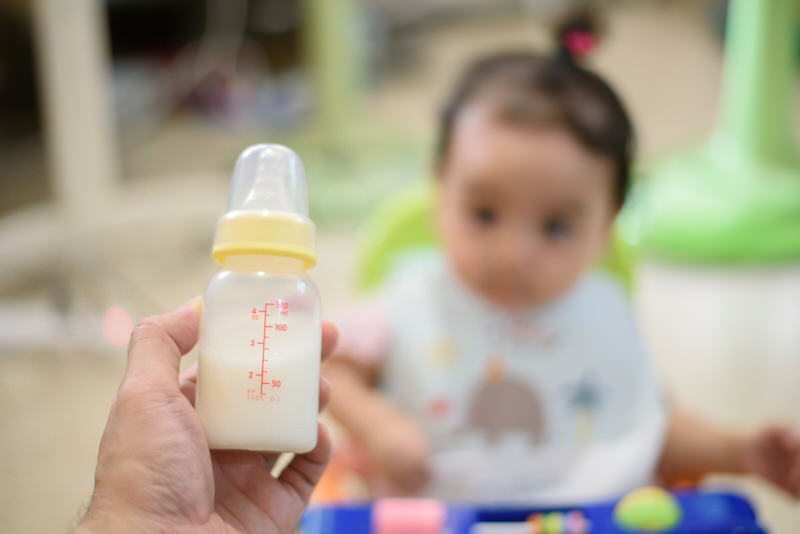 In most cases, nothing happens to the baby if she drank old formula, but she is exposed to high-risk foodborne illnesses, which sometimes result in vomiting, diarrhea. In severe cases, the baby can even suffer from dehydration. But, generally, the probability is very less for a baby to get sick after drinking old formula once; rather, she won’t get the desired nutrition that she would’ve gotten from the freshly made formula.

It’s 4 a.m., and the baby has been crying nonstop for the past half hour, and in a rush and a sleep-deprived mood, you’ve grabbed the bottle that was sitting on the table and fed your baby.

But by the time you’ve realized that the bottle you grabbed was the wrong one and was prepared before you laid your child to sleep, she also already chugged down most of it.

Looking after a baby is tiring and sometimes too exhausting, and so mistakes are bound to happen. Not every parent is perfect, but that’s the only way you’ll be able to learn and grow and try to be a better parent for your kid. After all, don’t we all want that?

So, before we dwell on what exactly happens when the baby drinks old formula, let’s first get our facts straight about how ‘old’ is the old formula?

What is old formula?

According to pediatricians and parents around the globe, formula given to the baby after 2 hours or more of its preparation is considered old or spoiled.

Why? You ask. First of all, a formula that is kept in the open for a long time gets spoiled because bacteria, known as Enterobacter Sakazakii, start growing in the formula.

This bacteria naturally occurs in dry foods such as powdered milk, herbs, and the baby’s formula. Unfortunately, it can even be fatal to baby’s, especially premature babies or babies with pre-existing conditions.

What happens if the baby drinks old formula?

It’s very easy to panic if you accidentally fed your baby old formula, but don’t worry, it’s not the end of the world. In most cases, babies don’t fall sick if they drank old formula that one time.

Feeding your baby old formula makes them exposed to a high risk of getting a foodborne illness, although there’s a very small chance it’ll happen. It’s like if you eat cookie dough once in a while, you don’t need to fall sick every time you eat it.

Having said that, you should also always note the time of formula preparation and feeding it to your baby because, unlike adults, babies have an immature immune system, and their bodies won’t function the same way as ours to fight off any contamination. The severity of illness increases in babies much more than that of adults.

The World Health Organization states that formula once made should be consumed within 2 hours of its preparation, given that the room temperature isn’t very high; otherwise, the formula should be fed within 1 hour from its preparation.

So, if your baby drinks 2-hour-old formula milk, keep calm because your baby will be fine, but if she doesn’t complete it, please discard the rest of the milk.

Vomiting – Your baby could start vomiting between an hour to 24 hours after consuming the old formula.

Diarrhea – This can start as soon as your baby drinks old formula. Your baby will produce runny stools frequently.

Fever – As your baby’s body is trying to fight off any infection in her body, she might develop a fever. If this is the case, consult the pediatrician immediately.

Dehydration – If your baby has vomiting or diarrhea, then look out for signs of dehydration in your baby. Dehydration can be very dangerous for babies, especially if there’s no intake of liquids.

5 ways to prevent your child from drinking old formula

Why is a baby formula not good after 1 hour of its preparation?

If the bottle is kept in the open at room temperature for a very long time, then it’s best to discard it as milk products are notorious for growing bacteria and can make your child sick.

If the bottle is untouched and freshly prepared, then you keep it in the fridge for 24 hours. The powdered formula should be used within one month after opening the tin.

Can you reheat formula if your baby didn’t drink it?

So, in short, as I said, if your baby happens to drink an old formula, there’s only a rare chance of your baby getting sick. So, don’t start panicking just yet.

Also, as a responsible parent, keep in mind that, no matter what time it is, no matter how much tired you are, when it comes to the health of your baby, it’s best if you stay alert and have a presence of mind not to repeat a mistake, and avoid feeding your baby an old formula.

If your baby shows any symptoms like vomiting, diarrhea, or fever, consult the pediatrician immediately.