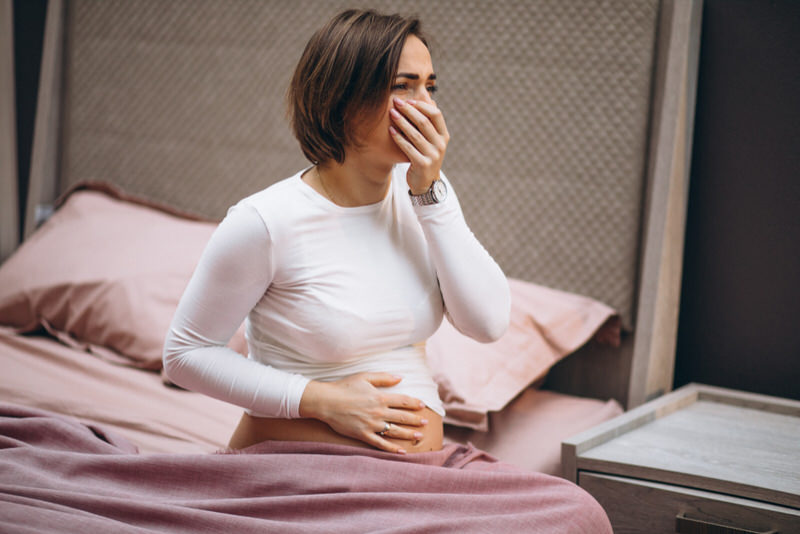 Nausea is very common in the first trimester of pregnancy but can also be an early sign of going into labor. In preparation for childbirth, your body begins preparing by loosening up muscles and emptying the contents of your stomach. Some women may experience uncontrolled diarrhea or nausea as one of the early signs of labor.

Feeling and being nauseous during your pregnancy happens to most women, and there are good reasons why this happens.

It’s not uncommon for a woman’s menstrual cycle to go on the blink. Pregnancy tests are sometimes preceded by morning sickness, a strong indicator that your body is going through drastic hormonal changes.

Feeling nauseous in the lead-up to the big moment is once again a sign that your body is dealing with major changes; however, this does not affect all mothers-to-be.

Let’s look at nausea before childbirth and shed some light on why this affects some mothers-to-be and not others.

Although all women go through their pregnancy in pretty much the same way, each pregnancy experience is unique, so no set rules can really be applied to every pregnancy. The difference between a mother’s first and second pregnancy can sometimes differ like day and night.

However, medical professionals have narrowed down some obvious early signs of labor approaching, and these signs may occur within 24 to 48 before you actually go into labor. Although these signs are strong indicators, it is not a given that every mom-to-be will experience them.

Women experience different cramp sensations like the cramps associated with Braxton Hicks and those related to pre-pregnancy menstruation, which shouldn’t be confused with contractions that are a lot more painful.

Braxton Hicks tend to be fairly painless false contractions that are spurred on by the tightening of the uterus, and in most cases, they subside without event.

Cramps leading up to labor are very similar to period pains and are a possible sign of early mild contractions, which will come and go over hours or even days before labor actually begins. Here are four signs that labor could be imminent.

Some women may experience pelvic pressure brought on by the baby dropping in the womb, called lightening, and may also cause lower back pain. Not all women experience lightening beforehand, as this may only occur during actual labor.

The womb’s opening is protected by a mucus plug to prevent bacteria from entering your womb during your pregnancy.

The loss of this mucus plug may indicate the onset of labor, but studies have shown that losing the mucus plug is not necessarily an indication of labor as it can rebuild itself. For some women, it is a strong indicator, but to others, it could be a false alarm like Braxton Hicks.

Even with an intact mucus plug, your virginal discharge may become more watery, stickier, and/or thicker. There might be a hint of pink in the discharge, indicating that labor is close or already in the early stages.

These four signs may not apply to all moms-to-be, but there is enough research and studies to list them as possible pre-labor or early labor indicators.

Does nausea not indicate labor is close?

For some moms-to-be, nausea may indicate signs of looming labor, but there is insufficient scientific evidence to substantiate this claim.

However, nausea is closely linked to diarrhea which is related to the loosening of muscles, including the rectum muscles.

A woman’s body prepares for labor by loosening muscles and emptying the contents of the stomach to make room for the baby to access the birth canal. There is a great deal of internal pressure in the lead-up to and during labor.

Depending on how your baby is situated in the womb and what pressure is applied, where will play a role in how your stomach is cleared for childbirth, if at all.

Most women will experience some degree of nausea before or during labor; however, it is not that common during pre-labor but fairly common in the first stage of labor.

Nausea can be related to the sudden changes your body is going through, and if you do feel nauseous before you go into labor, it’s important to stay hydrated and preserve your energy.

If you begin vomiting without other signs of going into labor and you just can’t keep anything down, then it’s best to contact your doctor.

Third-trimester nausea can be caused by a number of things besides the hormone changes that brought on morning sickness in the first trimester, which could continue throughout your pregnancy.

Here are some reasons why you feel nausea in your third trimester:

Just looking at some of the reasons above, you’ll see why nausea, although a part of pregnancy, is ruled out as a definite sign of impending labor.

However, feeling nauseous might be a symptom of a serious pregnancy condition like preeclampsia (high blood pressure) or HELLP syndrome, which is a serious liver problem.

If you’ve had a relatively normal pregnancy but begin feeling nauseous in your third trimester, it is best to contact your doctor for a check-up. It may be ruled out as normal if you’re close to your due date but leave nothing to chance. So get that check-up, especially if nausea persists.

Do babies become quiet before birth?

No, babies don’t stop moving to take a breather before birth. In fact, it is not normal for a baby to stop moving during your pregnancy, and the bigger your baby becomes, the more obvious the movements become.

Is taking a laxative before labor a good idea?

Is nausea before labor not stress-related?

There is an increase in anxiety or stress leading up to labor, but the correlation between stress and pre-labor nausea is largely overshadowed by fast-paced physical changes during the final day or two before labor begins.

Stress may exacerbate some symptoms, but this will vary between pregnancies, and it will be difficult to pinpoint it as the sole reason for nausea.

Nausea in the lead-up to labor is not as common as nausea in the first phase of labor. Although not very many, some mothers-to-be may experience what is termed “silent labor.”

It is when contraction pains are so mild that they are not even aware of being in labor. It’s possible to feel nauseous during this time as it is normally in this early stage that nausea occurs.

There are no solid scientific facts to support the notion that nausea is a sign of pending labor, but it does appear to be an old wives tale backed up by the many women who have felt nauseous during the first phase of their labor.

In many cases, nausea can be traced to diet and gas build-up, not to forget an active baby moving into the birth position and muscles relaxing in anticipation. Stomach fluids may get pushed up into the esophagus that will cause heartburn and nausea.

As discussed, there is no set time frame for the onset of nausea before labor as every mom-to-be and every pregnancy, even with the same mother, is different.

Hi! I'm Jennely. My hands and mind can't be still; neither can my three-year-old. So I'm either chasing him or my next project. I like to work smarter, not harder. This is why I write on topics that will help parents solve problems and enjoy precious moments with their little ones.